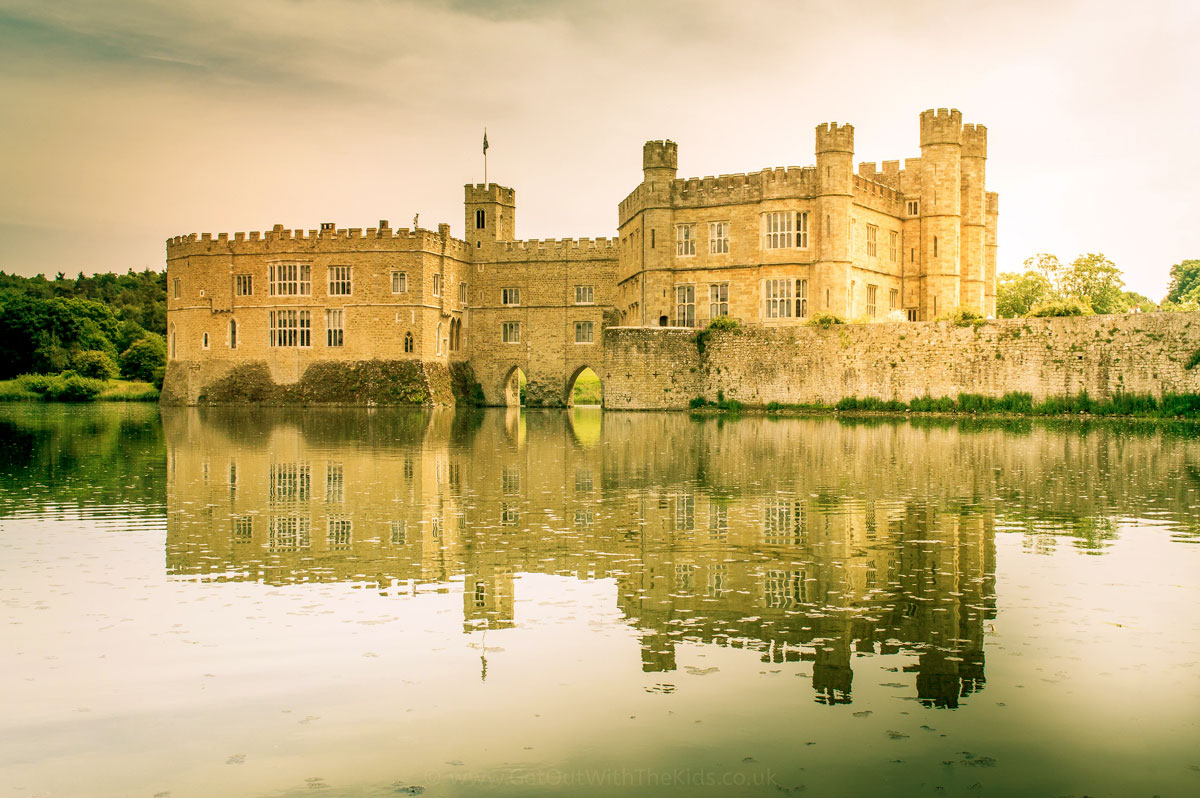 “Leeds Castle has been a Norman stronghold; the private property of six of England’s medieval queens; a palace used by Henry VIII and his first wife Catherine of Aragon; a Jacobean country house; a Georgian mansion; an elegant early 20th century retreat for the influential and famous; and in the 21st century, it has become one of the most visited historic buildings in Britain.

The first stone castle was built in 1119 by a Norman baron during the reign of William the Conqueror’s son Henry I, on an island in the River Len. In 1278, a century and a half later, it came into the possession of Queen Eleanor of Castile, first wife of Edward I.

For the next 300 years the castle remained a royal residence, before again becoming a private home. This in turn was handed down over four centuries, by both inheritance and purchase, through a network of interlinked families. Lady Baillie, the last private owner of the castle; a wealthy Anglo-American heiress who acquired Leeds Castle in 1926 when it was sold to pay death duties. Today, the influence of Lady Baillie continues to bring the state rooms to life while visitors can see the effect of Medieval and Tudor periods in many of the other Castle rooms.”

Leeds Castle is the only place along with Rye that I have not visited using public transports, I need to thank a friend of mine who brought Eleonora and myself here during a perfect sunny and quite warm day.

When you arrive here a fantastic Castle  welcomes you and is like in the tales, the castle is awesome, with an astonish park, big rooms and an incredible maze.

A couple of notes here, taken from the website, but that I think can be interesting to know in advance if you are planning to visit Leeds Castle, “due to space restrictions pushchairs cannot be permitted inside the Castle but a buggy park is provided. A free loan of baby slings is available inside the Castle. If you want during your tour of the rooms an audio guide is available (not in Italian by the way). We chose just to get in and explore the rooms by ourselves reading the history boards.”

Believe me or not but within the castle rooms, what makes Eleonora crazy was the Dog Collar Museum, this funny but at the same time fascinating collection of canine neckwear is spanning five centuries.

There are over 130 rare and valuable collars.  The earliest in the collection, dates back to the late 15th century and is a Spanish iron herd mastiff’s collar, which would have been worn for protection against wolves and bears roaming Europe at the time.

Other collars range from sixteenth-century German iron collars with fearsome spikes and ornate gilt collars of the Baroque period, through to finely-chased nineteenth century silver collars and twentieth century examples fashioned from tyres, beads and plastic.

The collection continues to grow thanks to donation received (maybe fan of “Fifty Shades of Grey” can contribute!!!!)

After this interesting experience before lunch we had the chance to see a falconry demonstrations that really likes children.

At this point we had some relax, for lunch we a had a pic nic in one of the three beautiful gardens that enclosed the castle, the “Lady Baillie Mediterranean Garden Terrace” this is a Mediterranean style garden, where you can relax and enjoy superb views across the Great Water.

If you like gardens and as you probably know Kent is known as the Garden of England don’t miss the Culpeper Garden that was originally the site of the Castle’s kitchen garden, and now has been transformed into a large cottage garden. With its informal layout and low box hedges as a border this very English garden features Roses, Lupins, Poppies, with exotic blooms mixed in to create a profusion of colour and scent.

The Woodland Garden alongside the River Len is a particularly lovely way to approach the Castle. Its carpet of Daffodils, Narcissi and Anemones presents a vibrant burst of colour. Later in the year, you can see very beautiful Azaleas and Rhododendrons

Another unique and fancy thing that will make your children happy is to go through the massive maze.

The Maze consists of 2,400 yew trees and when viewed from the centre, part of its plan mirrors a queen’s crown. It is set in a square, and yet, when seen from the mound or the air, the pattern is circular, this is unique to Leeds Castle and adds to the difficulty in solving it, by the way outside this incredible maze is  overseen by a grassy bank from where fellow travellers can shout encouragement or misdirections.

Once you’ve reached the middle of the Maze, return to civilisation through an underworld grotto, complete with macabre forms and mythical beasts created from shells, minerals and wood.

In my personal experience this is the biggest and the strangest maze, I have ever seen and the hardest to be solved too, but probably around the world there will be many others  with more difficult paths if you know invite me to discover them at: info@travelatbreakfast.com

This is all about my personal experience visiting Leeds Castle however you can do more such as:

For a customized trip in this area you can reach me out at: info@travelatbreakfast.com