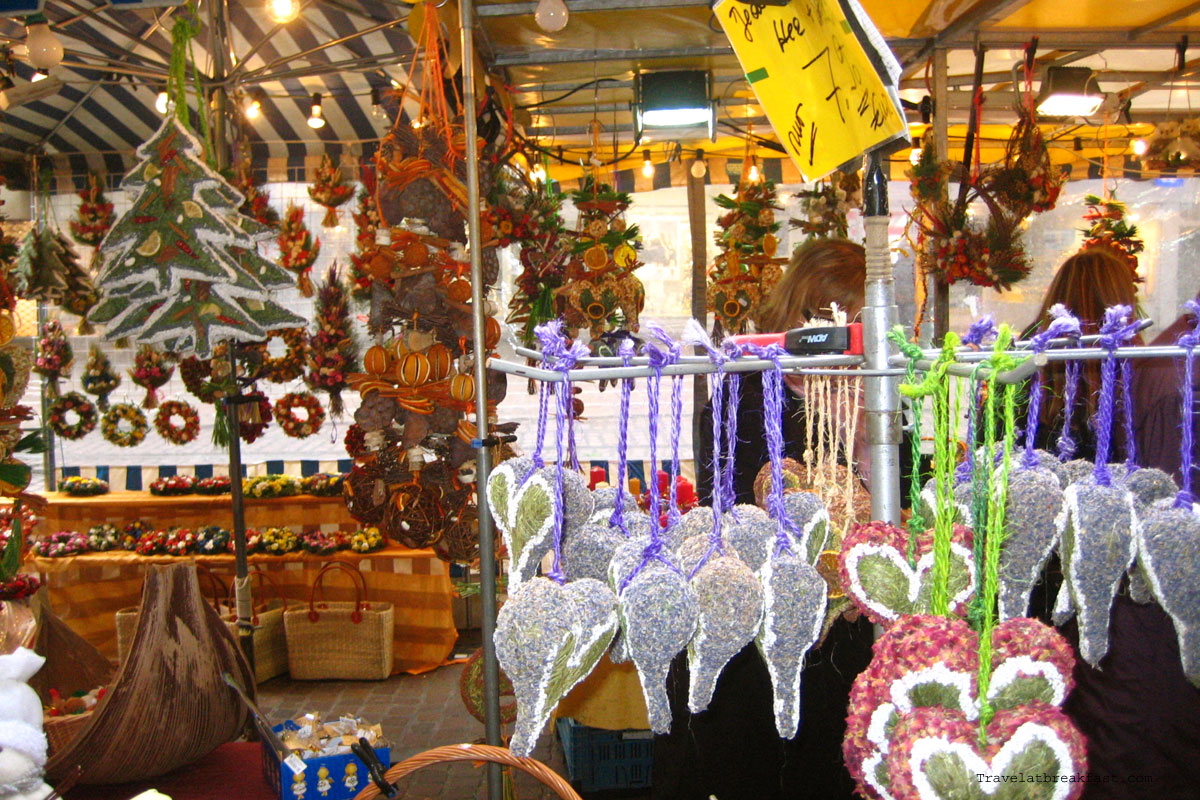 I have been in Freiburg before, in spring and summer time, however in winter near to Christmas was fabulous.

My husband had a meeting in Freiburg (im breisgau) while I was on maternity leave and because it was close to Christmas I decided to go with Eleonora.

We drove to Freiburg from Milan and stayed a little away from the city center of Freiburg, in the Black Forest. This hotel was super, the room we had really surprised me, was very spacious and there was also a big and decorated Christmas tree. The breakfast was good as well and served in a room decorated as an authentic Dutch Christmas, we had dinner as well here, which was good as we didn’t want to go out every night in the middle of nowhere to find a restaurant.

Freiburg is a medieval university city on the edge of the Black Forest, easily reachable from north Italy too by car or by train. When we were here, it was the beginning of December however everything was ready for Christmas so we enjoyed the Christmas Markets on the Rathausplatz in the heart of the Old Town which is considered one of the most beautiful Christmas markets in the whole of Germany.

Framed by the Gothic cloister of the former Franciscan monastery, the nave of St. Martin’s Church and the picturesque facades of the new and old town halls, an enchanting collection of little houses is erected four weeks before Christmas. I would say that Eleonora was captured by the lights, the music and the smells, every stand was nicely decorated. I liked the wood’s decorations, it was impossible to resist and not to buy decorations for the Christmas Tree. We bought also a nice Carillon looking as a “Boule De Neige Noel” playing a Christmas melody that fascinating Eleonora, especially when the characters in the boule started to move while the snow falls.

We enjoyed also the mulled wine. At the Christmas Market you can buy the glass and keep it as a souvenir but the point is that you can refill it as much as you like for few euros. We tried also the gingerbread, the roasted almonds and the hot chestnuts.

I like beer so I would suggest to drink one at the “Martin’s Brau”, we had a lunch here the last day before our departure and I found this Beirkeller style pub/restaurant much larger than its near neighbor. The beers are brewed on site and are very good. They also serve generous German pub style food too – we opted for the Schwarzwald platter to share consisting of grillhaxe (roasted pork knuckle), bratwurst sausage and a bacon steak, accompanied by the usual chips and fried potatoes and sauerkraut with a beer sauce. However, I need to admit that I’m not a fan of any sausages or wurst, so I always had some problems to find something easy to eat that I like.

If you are in Freiburg don’t miss to walk in Münsterplatz a cobblestone pedestrian square surrounding the minster, ringed by historic monuments and scene of a market that trades every day of the week except Sundays, and as for that market, there are 96 regional produce stalls on the north side, and 65 on the south side selling anything from exotic spices,  potato noodles, Black Forest ham and bacon sauerkraut to handicrafts. I visited the square and the market in the morning with Eleonora the smell was great and a lot of people around noon was here just to jump in one of the snack bars, at the foot of the minster selling freshly cooked food like a long, Freiburg style wurst in a toasted bun, however as said above I did not try any of them.

Freiburg is also a cultural town, I had the chance to see a concert of classical music in Freiburg at the Konzerthaus, the orchestra played Berlioz who is my favorite composer, but it also quite unusual to listen  an entire concert based on his music so I can only give a prize for this to Freiburg.

Something really typical in Freiburg are the Small Canals (Freiburg Bächle) at the side of the streets. The Freiburg Bächle are an integral part of the historical old town. You can’t spend any time in Freiburg without dodging one of the little waterways in grooves in the Old Town. They were first recorded in the 1200s and in Medieval times they had a few uses, like helping to fight fires, providing local trades like tanners with water but were also open sewers. The system of channels adds up to 15.5 kilometres, 6.4 of which is underground. Today the canals cater help to cool things down in summer and are a popular play area for adults and children.   The legend also goes that if you accidentally step into one you will end up marrying someone from Freiburg. This happened to me as well, while I was walking looking up at the beautiful buildings present in the old town, but I’m still married with my husband, maybe this is working only if you come here when single……

Another very impressive monument is the cathedral, and in particular the tower with the open-worked pyramids completed by 1330 which is 116 meters high.

Another couple of spots not to be missed are:

Everytime I visited Freiburg on my own, I used to stay at the Novotel Freiburg am Konzerthaus which is a 4-star in close proximity to the main station and downtown Freiburg. Shops, the theater, and popular city sights are all within walking distance of the hotel. Complimentary Wi-Fi is available. The hotel serving a continental breakfast and they also have a restaurant with terrace which serves a variety of food. The room are quite spacious and up to two children can stay in the family room free of charge.

If you would like to have a more customized plan for your trip in Freiburg or which Christmas Market visit in Europe just wrote me at: info@travelatbreakfast.com