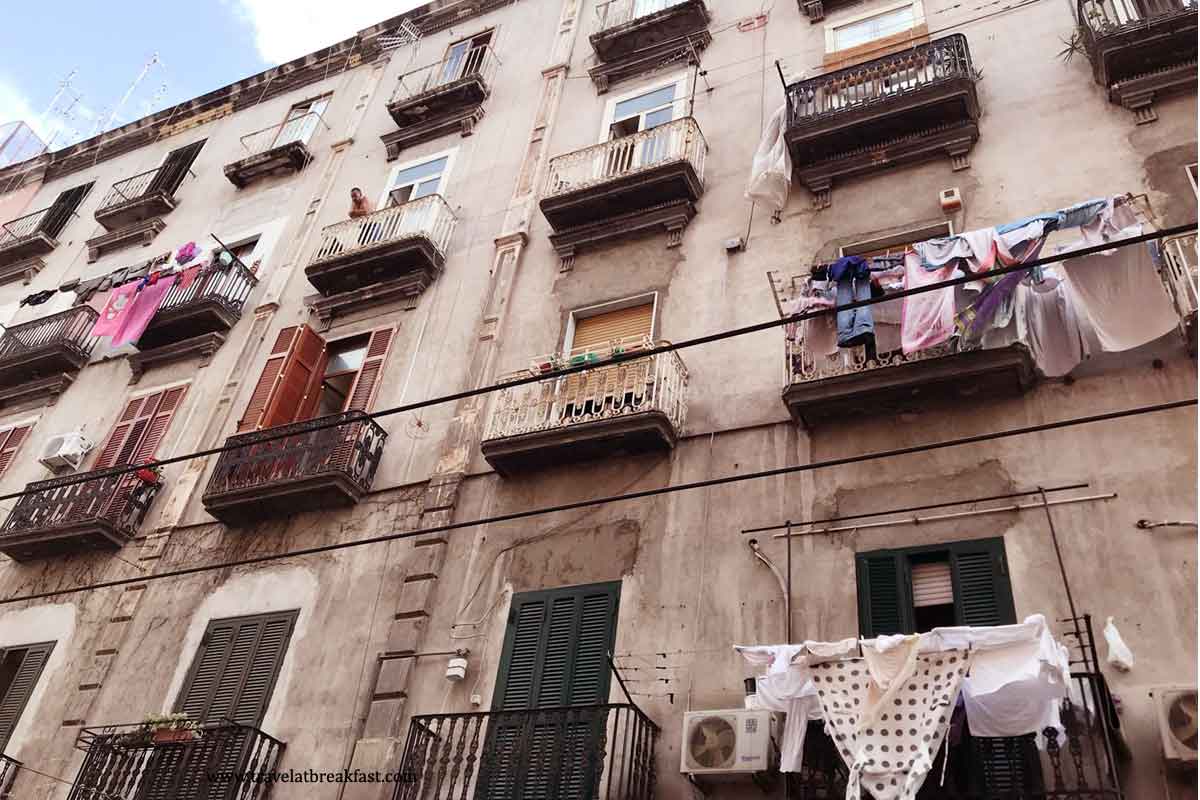 If you know me, and you have read some of my posts on Travel At Breakfast.com, you know that I try to  use as much as I can public transport, therefore I arrived to Naples from Milan by train.

I arrived early afternoon so the first thing I wanted to do is to leave my bag and start to explore this such incredible town.

I would suggest a couple of options here:

Where to stay in Naples:

I stayed at the “Royal Continental” a four-stars hotel located in a pedestrian area (Via Partenope) just in front of Castel dell’Ovo, which has one of the most stunning view of Naples.

Castel dell’ovo built by the Normans in the 12th century, is the Naples’ oldest castle owes its name (Castle of the Egg) to Virgil. The Roman scribe reputedly buried an egg on the site where the castle now stands, warning that when the egg breaks, the castle (and Naples) will fall. Thankfully, both are still standing, and walking up to the castle’s ramparts will reward you with a breathtaking panorama.

I think I can spend a day here, just  looking outside the restaurant roof, but I was here to explore, next time will be  more relaxing.

Before to move on with the itinerary of my day in Naples here you a couple of hints about how to move if you are in Naples just for the day.

What to see in One Day in Naples:

How to Move in Naples:

You can take the City Sightseeing bus, the red line, stops pretty much everywhere in the city center and offer you the possibility to see some surroundings area too using the blue line (I will talk about that later in my post).

The ticket is valid for 24h and you can have a 10% discount if you arrived in Naples by train.

you can take the metro. The Line 1 is really good to visit the city center and also can be used by the Garibaldi Train Station and Capodichino Airport, indeed the Metro Line 1 was originally built to connect the city with the hill districts of Vomero and Colli Aminei and was known as the Hill Metro or Collinare.

Today, Naples Metro Line 1 connects the city center with the northern district of Piscinola and is known as “Metro dell’Arte” for the contemporary works of art that have been installed in many of its stations. A major expansion of Naples Metro Line 1 has been on going for a number of years. Forming a complete ring, the line will continue from Piscinola to the Capodichino Airport, Centro Direzionale, Piazza Garibaldi and return to Piazza Dante via  Piazza Municipio where it will connect to Naples Metro Line 6.

Don’t miss Toledo Station one of the deepest in the line at 50 meters, and it is themed around water and light. The art of the station, curated by art critic and former Venice Biennale director, Achille Bonito Oliva, includes two mosaics by the South African artist, William Kentridge, as well as Light Panels Robert Wilson and works by Francesco Clemente, Ilya and Emilia Kabakov, Shirin Nehsat and Oliviero Toscani. What really impress is the deep, blue, sparkling crater that connects the ground level with the great lobby 38 meters below. No wonder that The Daily Telegraph included the Toledo Station on its Europe’s Most Impressive Underground Railway Stations list.

the city center is not so big and you can easily walk to see the most interesting monuments.

Where to eat in Naples:

Pizza Pizza and again Pizza…. if you are in Naples you can’t miss it in Via Dei Tribunali you will find a lot of historic ones however let me give you a couple of my favorites:

“Sorbillo” (via dei Tribunali), from 1934 the success of this well known pizzeria in Naples is due to the high quality of the ingredients and very good pizzaioli. Via Dei Tribunali 32.

Da “Michele” a cross street in the middle of Corso Umberto (Via Cesare Sersale 1). Condurro family runs this Pizzeria from 5 generations now, in the same way the founder Michele was used to work. The ingredients here are very good and used in the same way more than one century.

Another option is to dinner in a proper restaurant enjoying good fish, Naples is a maritime town so fish is always a good choice. My favorite restaurants are in the Piazzetta marinara near Castel dell’Ovo.

The Borgo Marinaro after dinner you can have a romantic walk on the pedestrian area of Via Partenope.

Officina Del Mare is my favorite, but you can try il Translatico o la Scialuppa too.

Last but not least do you know that Naples is also famous for its ragù?, well there is a restaurant where you can eat the best I ever found “Tandem”

Try the bruschetta as a starter and an handmade pasta with ragu, if is not enough add the ragu with the cafone bread very yummy I know that they have good dessert too but I wasn’t able to try any of them too much food.

If you would like to have a more customized plan for your trip in Naples just wrote me at: info@travelatbreakfast.com